Rocking Thule #2: In Search of the Golden Disc; the Tower of Golden Scales

Whew! Honestly, I tought I'll be able to publish content more often. Even though most of the stuff is ready, translating, editing, occasionally expanding it, drawing, mapping, in addition to a satisfying but very challenging professional life, not to mention private life, well... the mix of these proved to be a more time and energy-consuming process than I've anticipated.

Nonetheless, here we are! I'll start off with some musings about my Thule campaign, then a short scenario describing the dangers of the Tower of Golden Scales (download link to the PDF version is right below, if you are interested in just that). The next one or two posts will probably also feature small locations and sidetreks that could be inserted into any party's journeys, then we'll hit on some medium-sized dungeons. 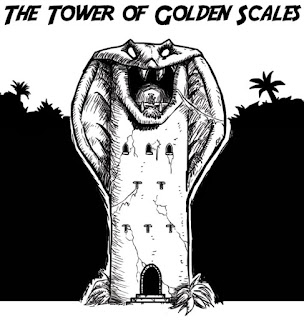 The party returned from the Cavern of Golden Tears, just to get betrayed by their employer, Dredan Taroth, instead of being paid. (I know, fckin’ genuine, isn’t it? ;)) Since they already had quite a lot of enemies in Quodeth, they decided to get some allies for a change - and their attention turned towards the temple of Ishtar. How convenient that the archpriestess of the goddess of war, passion and love just needed able warriors for a holy quest! The party took it up on them to prove their worth for the priestesses.

The quest was simple enough. They had to find a Golden Disc - some kind of a vessel the gods use to send messages or predictions for their followers, by casting it down from the skies as a meteorite. I came up with this as an adventure hook for Night of the Yellow Moon. The players needed to escort Danakhia, Blind Oracle of Ishtar to the barbarian village of Morlun, to the ammur barbarians who found the golden disc, so she could make sure it was authentic. How a blind person would do this, you ask? Well, my players didn’t, but they’ve found the answer later anyways.

Danakhia was not blind at all. Ishtar gifted her with constant holy truesight. In exchange, Ishtar herself was gazing out of her eyes. No mortal men nor women could withstand that gaze for long without being overwhelmed by madness in a form of uncontrollable, passionate feelings of love and rage. (Mechanically: Charisma save against DC 15 each turn when there is eye contact. One may use his/her reaction to avert his/her eyes. But most people wouldn’t think of this, as Danakhia doesn’t look like a basilisk or a medusa.) Danakhia didn’t like it when people around her suddenly wanted to rape everything they could get their hands on, so she wore a blindfold instead. A fact that the party found out when Margian Crimson Slavers boarded their ship, and in the thick of the melée, Danakhia was forced to use her gaze to confuse their enemies. (Luckily, everyone got away without being raped, and the horny pirates have been defeated.)

Now, see, there are leagues inbetween Morlun and Quodeth, with a lot of sites on the map not explained by the campaign book. Even though the book suggests adventures of an episodic nature, I didn’t like the idea to just start it at the gates of Morlun. Therefore I had to fill in the gaps in case the players decided to explore some of these places. I did not want to make whole adventures out of these locations, just some encounters to show the players that Thule’s wilderness is full of unknown, yet dangerous places, and one can never be sure what he’ll stumble upon...
Read more »
Posted by Chomy at 2:55 PM 11 comments:

So here is this setting of Sasquatch Studios, Primeval Thule. It has been released quite a while ago for five popular systems - Pathfinder, 13th Age, Savage Worlds, 4E and 5E. For 5E, it is almost impossible to buy it in print nowadays, so I guess a few people must have it on their shelves. It is most often described as “Conan meets Cthulhu” by folks who reviewed it, which simply sounds awesome IMO. It is a Sword & Sorcery setting strongly influenced not just by Howard and Lovecraft, but Leiber, C. A. Smith, Moorcock, Burroughs and others. The whole thing feels like a Frazetta painting come alive, which, basically, would be the animated movie ‘Fire and Ice’, and you couldn’t get a more precise metaphor if you wanted to sum up Primeval Thule briefly. Great, huh?

SO WHERE ARE ALL THE FAN MATERIAL FOR THULE ON THE INTERWEBZ?! The adventures? The campaign logs? Anything?

Surprisingly, nowhere. It’s like nobody is playing Thule. Maybe every 5E DM is running Adventurers’ League and official WotC campaigns. Or I’m just too partial to Sasquatch - I admit, I really like Rich Baker’s stuff in general. Nonetheless, this made me start this blog with content I brew up while running my own Thule campaign.

I will try not to bullshit too much before presenting the actual content, but you might be interested in the background. I started my Thule campaign a little more than a year ago. Originally, my intentions were to DM a few official adventures loosely connected to each other, as Thule encourages an episodic structure for your campaigns. I only had a few months of spare time and I did not plan this to be a long-term relationship - which it actually turned out to be.

Player characters started in Quodeth, a city that looks like a love child of Lankhmar and Venice. It has so much potential you could easily DM a whole campaign within its walls from level 1 to 10. The characters had a few adventures within its walls, taken the Tower of Black Flame for themselves, made friends and enemies in the many thieves guilds of the city, and, eventually, caught the attention of Prince Dredan Taroth. The prince considered them to be valuable useful tools and commanded them to seek out the truth behind the very unlikely story of a mummy weeping gold - and promised both support and rewards for it. So started the Cavern of Golden Tears, which is a short wilderness trek and a dungeon of ten-or-so rooms, detailed in the campaign book of Thule.

After finishing the adventure, one of the player characters - an Atlantean scholar and wizard - decided to stay and investigate the ruined city of the long lost civilization of janni that ‘created’ the aforementioned (spoiler: cursed) mummy, so I had to come up with a sidetrek for him… here comes the description of the remains of Kal-Ne-Moz.


You can download the adventure in digest printer-friendly .pdf format here 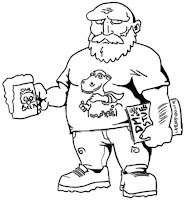 The name is Gábor, although most friends call me Chomy. I’ve been an enthusiastic roleplayer since the early nineties. Over the years, I’ve heaped up a lot of self-created material I do not consider worthy (or possible) of publishing in a conventional way, but regret just having them collect dust in the drawer. Most of them will stay there for eternity, as they would need way too much editorial work to become usable for others. Some of them might also feature content found on the internet, created by other people for free personal use. So I’ve decided to return the favor and upload the stuff that might be usable for fellow gamers. Salvage anything you may!

Also, some rant about my ongoing campaigns, or gaming in general might occur.

Please note: stuff found here are all fan-created material, originally made for my own personal use at home. They are not intended to hurt anyone’s copyrights or intellectual property. If I did so by mistake, please contact me so I can correct my wrongs.

By no means should anything found here be sold in any format, for any price.

What should you expect to find here?

Adventure sites, encounters. Small to middle-sized dungeons. Very short adventures that could be used as a sidetrek or something the player characters chance upon while wandering from point A to B. Random encounter tables. Magic items. Some might be used as-is, others with minor tweaks, or simply as a source of ideas. Mostly this kind of stuff.

The deal is, I currently have a few ongoing D&D 5E campaigns - one using Sasquatch Studio’s fantastic Primeval Thule setting, one based on WotC’s Storm King’s Thunder, and another one using a converted version of Rob Conley’s Blackmarsh. This means most of the content will use 5E rules (for now), though I’ll refrain from using copyright material (e. g. using monster statblocks from the books), even those in the SRD, so do not expect the stuff to be especially crunchy.

I’ve started roleplaying with AD&D, and I still consider it to be my favorite edition (retroclones included). I’ve had a burnout on 3E, so I welcomed 4E when it came out, though it didn’t take too much time to realize it wasn’t my cup of tea. Yet, my party at the time wanted to play it, so I’ve DMed it for (some very long) years. Some of my stuff will come from this time, but I’ll most likely convert it to 5E rules.

At the same time all this happened, I became quite a fan of BECMI - an edition that never really made a fanbase in my home country -, shortly ventured into Das Schwarze Auge (3rd edition, strictly), and I’m crazy for DCC RPG and its adventures. I’ve observed the OSR closely and with awe, and it had a very strong influence on my taste.

As for the future: well, plans are constantly changing. But there are simply too many adventures on my shelves designed for Labyrinth Lord or Swords & Wizardry that *must* be DMed at some point, so...

Okay, I think this should be enough for introductions. Let’s see some content.